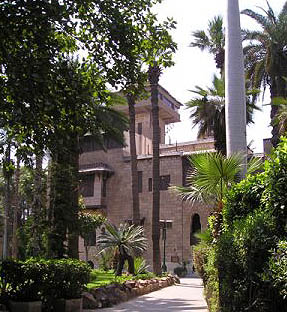 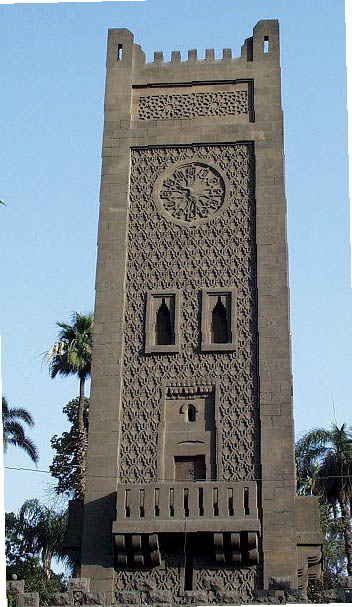 Conservationists and horticulturists relax. Last week, an eleventh hour prime-ministerial decree spared Manial Palace from transmogrification into a Disneyesque five-star hotel. It appears the century old palace will revert to what it was originally destined to be: a museum and botanical garden.

When he commissioned Sheik Mohammed Afifi to execute his magnificent Oriental alcazar, Prince Mohammed-Ali Tewfik chose the island of Roda. It was out of harm's way and spared the dust and turmoil of a modernizing Cairo. In view of its unique topography, the silt-laden island still offered as its main attraction botanical remains from a recent past: Banyan, Cedars, Royal Palms and Indian rubber trees--remnants of the Bostan al-Kebir or Big Gardens started in 1829 by the prince's great-grandfather, Viceroy Ibrahim Pasha.

This landmark island property put together by Viceroy Ibrahim Pasha changed several hands before its purchase by Prince Mohammed-Ali Tewfik in 1902. One of the interim owners was the duc d’Aumont et de Villequier a renown aristocratic French traveler who perished in 1888 leaving his entire assets in Egypt to his sometime intendant and countryman Jean Claude Aristide Gavillot (1837-1912). Originally from Semur France, Gavillot was a sometime judge and “depute de la nation francaise au caire”. Besides being an avid traveler in Africa and the Arabian Peninsula, Gavillot was also an expert on the legal travesty known as “Loi des Capitulations”, which was later on replaced by the Mixed Courts system in Egypt.

A modern day Ibn Batuta, the well-traveled, European-educated Prince Mohammed Ali Tewfik was bent on reviving what remained of the fabled gardens in a large dedicated enclosure henceforth known as the Manial Palace.

Born in the floradora palace of Kobbeh north of Cairo, then on the edge of the desert, Mohammed-Ali Tewfik retained vivid recollections of its "Garden of a thousand delights" his own terms when describing it in his unpublished biography.

Following the partial completion of Manial Palace in 1907 the prince and his head gardener took off for the four corners of the globe in search of saplings and one-of-a-kind floral species with which to enrich the palace gardens. The pride of the collection consisted of several cacti acquisitions from Mexico.

It was therefore against a background of luxuriant tropical and desert plants that the five detached palace buildings formed the ensemble of Manial Palace where Turco-Islamic architecture prevailed. Whether in the salamlik--reception quarters, the haramlik--main residence; the throne room, the golden hall or the palace mosque, Turkish ceramics from Iznik and Kutahaya adorned most of the walls. What remained of the vertical surfaces was intermittently grafted with Sermas-silk embroideries and portraits of Egyptian and Turkish royals, some of them especially painted by court favorite the Turkish-born Hedayat.

Meanwhile, the palace's plaster and wooden ceilings were decorated with intrinsic designs and works of art from which hung giant Turkish and glass mishkas or custom made crystal de Boheme chandeliers. And if the darkened and confined arabesque living quarters and salons abounded with Turkish jades, Persian opals and inestimable ceramics, the palace's marble and wooden floors were covered with priceless oriental rugs and carpets forming one of the world’s most important collections.

Indeed the traveling prince had the eye for what was unique and beautiful. From the fallen palaces in al-Shaam (Greater Syria) he purchased inimitable pieces that included meticulous wooden and mother of pearl ceilings, Mamluk-era doors and exquisite glass lamps. From forgotten yalis and konaks on the Bosphorus the collector prince saved many an objet d’art and irreplaceable artifacts from destruction. He would simply purchase the entire collection be it a gilded hall or a facsimile gallery around which he constructed a new section within his Manial fantasia thus accommodating his priceless discoveries. The belatedly built Golden Hall is but one example of such bold endeavors. The prince added this modern-era concrete shell in order to accommodate a reception hall which was part of an Istanbul palace belonging to the prince’s maternal grandfather Ilhamy Pasha.

While difficult to distinguish between the private and public areas of the haramlik, the fanciful divan with its lookout tower is probably where the prince wrote his polished publications describing his travels. Somewhere by the southern corner of the palace gardens stood a menagerie, home to sub-Saharan fauna much of which had been personally hunted by the prince. Situated nearby were the royal stables stocked with Arabian thoroughbreds, including those that had accompanied Mohammed-Ali Tewfik to Europe daunting French countesses and English lords.

In A King Betrayed, self-styled royal biographer Adel Sabit claims the prince was a “Harmless, colorless and uncontroversial snob” devoid of any ambition save that formalities be observed at all times. On the other hand, Mohammed-Ali Tewfik's grandnephew Prince Abbas Hilmi remembers him as a devout and cultured man. "He was so aloof it was almost impossible to break through the immaculate facade."

British diplomat Sir Ronald Storrs took a liking to Prince Mohamed Ali Tewfik describing him in his book Orientations as someone who revived Oriental splendors at his Manial Palace and characterized by his courtly bearing and graceful entertainment; his fine devotion to his mother and "his great 'lucky' emerald ring".

But the 'lucky' ring was not enough to change the prince's destiny. Twice Egypt's Heir Presumptive (1892-99 & 1936-52) and for a short while head of the first Regency Council, the prince never made to the throne. Yet, it appears he was prepared for such an eventuality, for tucked away in his palace gardens is a facsimile throne room. Whether out of design and ambition, or simply another fetish with which to embellish his wondrous environment, the intent of this unique hall remains a riddle. In any case the throne-room-that-never-was was another venue where the tidily attired prince--best known for his precariously slanted tarbush--held virtual court directing etiquette and protocol. 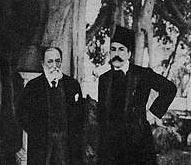 Several contemporaries attest the palace salons were never without grace. Aziza Sabit, one of the prince's younger relations, remarks how "Privileged friends and select members within the royal entourage were sporadically invited to a variety of genteel lectures, concerts and poetry readings. Tea at Manial Palace was an elaborate affair where Turkish Delights were served next to French pastries and Petit Four." It appears that at these selective encounters conversation was conducted in a simultaneous hushed babble of Turkish, French and English, for although the prince spoke excellent Arabic, it was a tongue alien to his highborn kin.

For other kinds of entertainment we find a music room, a billiard and fencing hall, and a reading a library situated directly above the movie-set throne hall.

It was at Manial Palace that the prince's houseguest, Camille Saint-Saens, gave private recitals and composed some of his music including Piano Concerto no. 5 "The Egyptian".

With the birth of King Farouk's only son in January 1952, the thought of reigning over Egypt was forever erased from the septuagenarian prince's mind. In any case, Mohammed Ali's dynasty was to rendezvous with a fatal blow the following July when the Free Officers gradually did away with Egypt's tottering monarchy.

Like his older brother Abbas Hilmi who died in exile in Geneva in 1944, Prince Mohammed-Ali Tewfik also expired overseas, in a third floor suite at the Beau Rivage Palace Hotel in Ouchy-Lausanne, Switzerland, not far from Chateau de Lancy where he had studied as a schoolboy. His sister Nimet Kamaleldine, at Cap Ferrat at the time, was the only family member available to handle the immediate burial details sur place. And despite his having prepared for himself an elaborate marble mausoleum in Cairo as a final resting-place, the sometime heir-apparent to Egypt's throne was eventually laid to rest in an unpretentious tomb next to his brother and father at the Afifi Cemetery in Cairo. "Perhaps it had something to do with the fact that the planned mausoleum was dismantled and the marble used many years later for President Gamal Abdel Nasser's own tomb" remarks his grandnephew.

But before the prince's wishes could be honored, a turbulent interim period intruded with dire consequences. Exactly when is difficult to say yet it was during the second decade of the republic that the palace gardens succumbed to the first post-monarchy attempts at tourism promotion. Rudimentary wooden cabanas potted between the park's magnificent trees enabled libidinous Club Med holidaymakers to frolic freely with the consent of palace's new caretaker--the newly formed ministry of tourism. A large pool materialized in the middle of the botanical garden so that the new patrons of the palace could freely bake their buns.

The only silver lining of this senseless phase of the Manial Palace's history was that the local Club Med director was a retired self-proclaimed Egyptologist. "Realizing how lucky I was to be in this wonderful setting," says Alain Fouquet-Abrial formerly of the Louvre Museum, "together with some of my assistants, armed with razor blades, we attempted to restore parts of the Golden Hall removing the more recent coats of paints in order to revert the hall to its original color."

Then came the winding cement alleys carved out of the floral base and a large swimming pool dug out where unique tropical trees had once stood. What escaped the Rothschilds-owned holiday factory went to a mélange of government departments so that an army of futile bureaucrats and civil servants, most of them insensitive to their unique surroundings, replaced what had formerly been the exclusive preserve of royal guards, black eunuchs and trained palace personnel.

The Golden Hall meanwhile became the scene of sundry Sadat-era mega-weddings. And where poetry readings and piano recitals had once filled the rarefied palace halls, belly dancers and gawking commoners were pounding the floor to the sounds of disco music. Such festive occasions were alien in the prince's days. In fact, his 1941 betrothal to his French companion of many years, Suzanne Hemon, had been such a private affair few realized Prince Mohammed-Ali Tewfik was married.

When in September 1940 a few privileged Egyptian and Ottoman royals attended the wedding of the prince's nephew to a granddaughter of Turkey's last sultan, not even the tiniest zagroota--ululation had been allowed. All one heard coming out of the palace was the occasional drawn out cry of a karawan--nightingale going to sleep or the chirp of some migratory specie in blissful transit.

Today, as a result of this latest government decree to conserve and restore all the royal palaces, the Manial Palace and its botanical gardens patiently await a second wind. 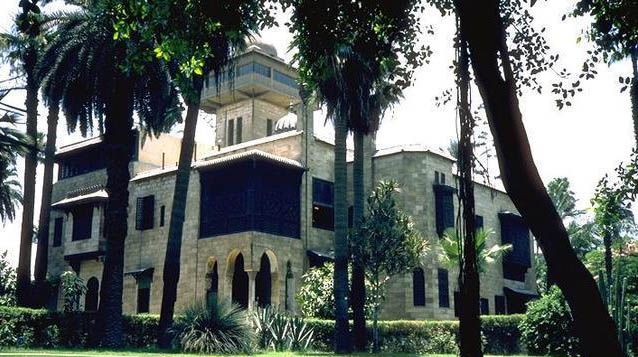 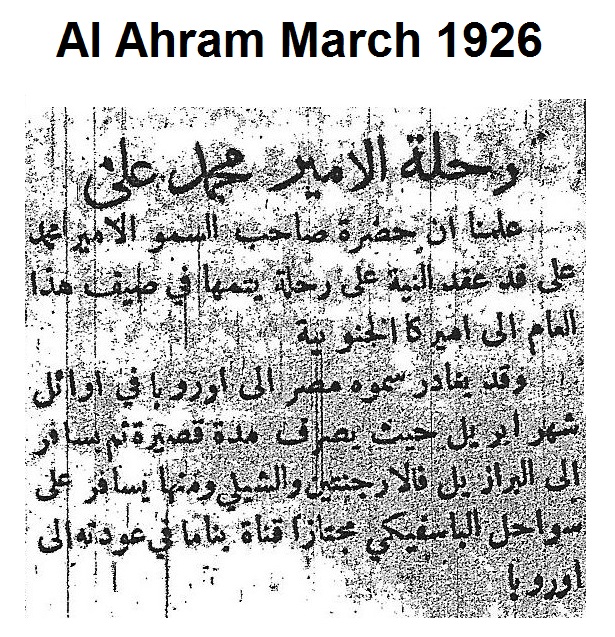 Clipping from 1926 describing Prince Mohammed-Ali Tewfik's itinerary to South America via the Panama Canal. During such travels the prince collected rare shoots and sapplings for re-tranplant in his Manial Palace 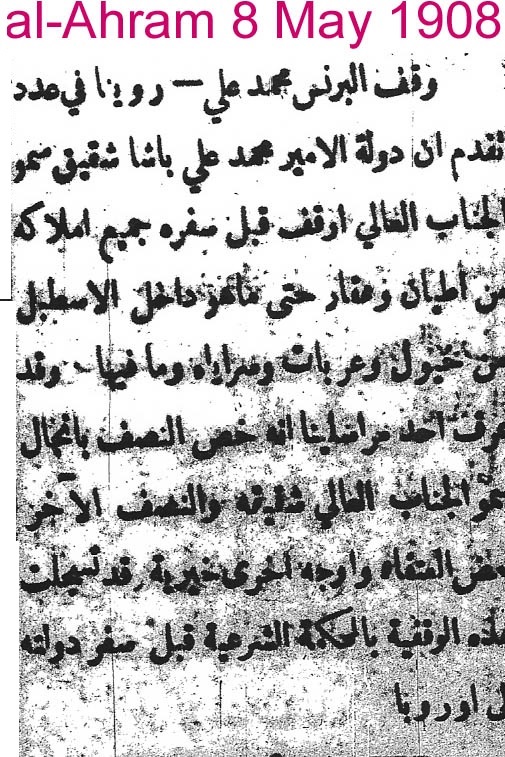 first wakf or trust, created in 1908 by Prince Mohammed Ali-Tewfik 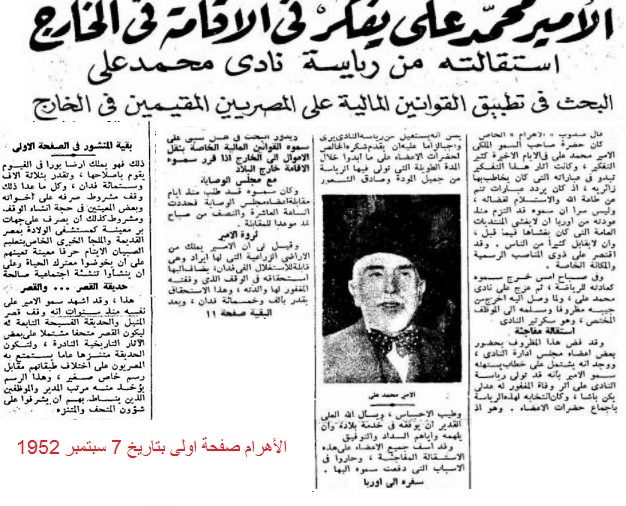 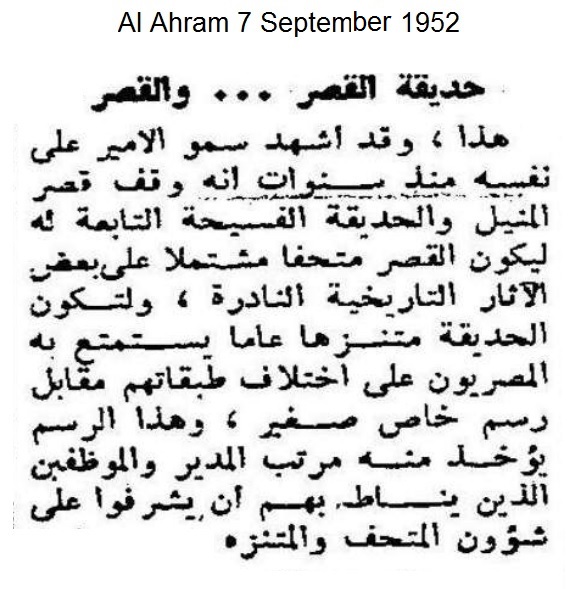 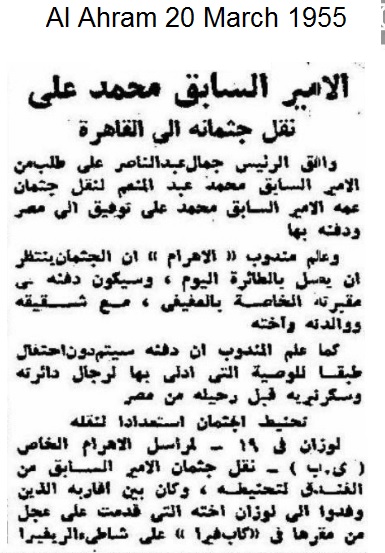 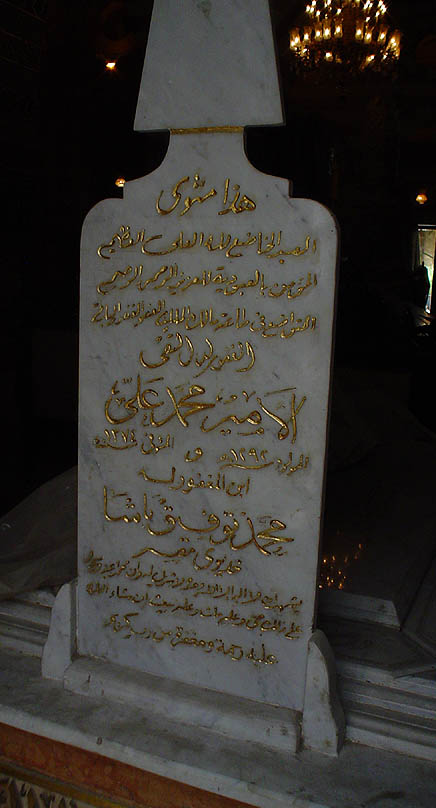 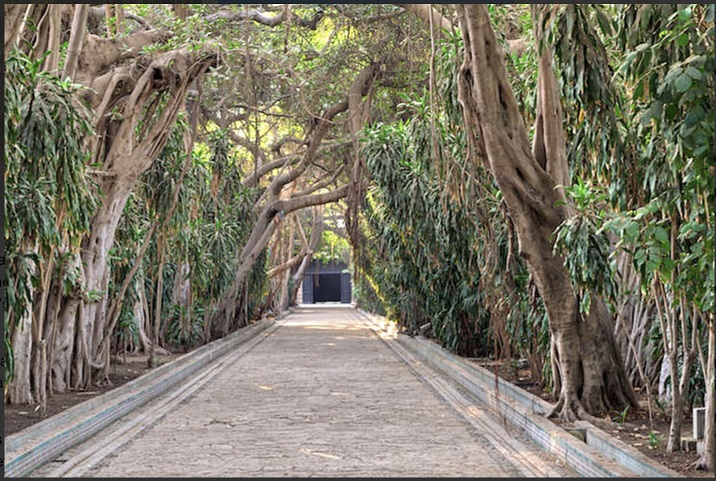 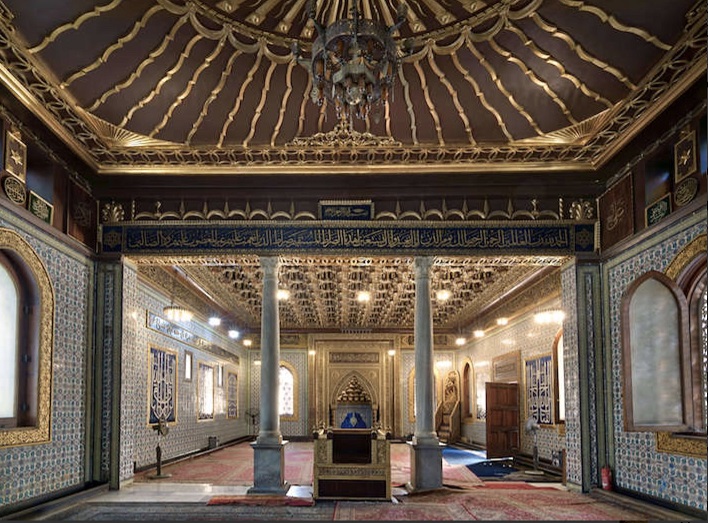 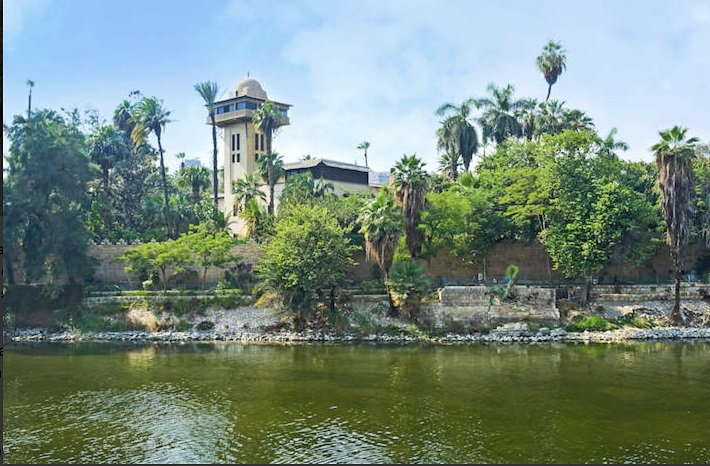